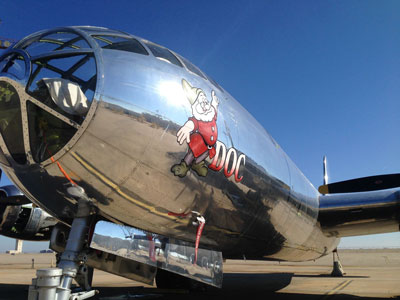 The weather is warming up in Kansas, and that means the restoration crew can resume work on making final preparations and adjustments on our historic B-29 before FAA inspection for airworthiness and eventually, first flight.

Thanks to the 22nd Maintenance Squadron at McConnell Air Force Base in Wichita, restoration volunteers were able to change the tires on the nose gear. There’s also good news on a temporary and tentative hangar for Doc. Thanks to the owners and operators of Wichita’s Air Capital Flight Line, Doc will be able to be sheltered inside during inclement spring-time weather. That means protection from wind and hail, and the opportunity to keep the engines warm and allow for final preparations for engine runs and FAA inspection.

The crew needs to have a sustained temperature of at least 50F to run the engines because of the oil viscosity (120 weight). Running engines when they are cold soaked can cause extensive damage which is something the restoration crew is not going to let happen.

The crew has all manuals and documentation in order, and there are no issues with the aircraft. Once the crew able to run engines again and are comfortable we’re ready, the crew will request that the FAA begin their evaluation process. This will include an inspection of all documentation and a comprehensive physical inspection of the aircraft to determine its airworthiness. During the evaluation, the crew will be required to run the engines.

Doc’s Friends is also awaiting permission from Washington, D.C., to allow the flight test crew to use a non-joint-use active military airfield as an operating base for test flights.

Bottom line, the entire Doc’s Friends team is working to be sure our historic warbird—and  all of the hard work and thousands of hours of restoration work—is protected, and we are not willing to put all of that and the crew members at risk just to meet an arbitrary deadline.