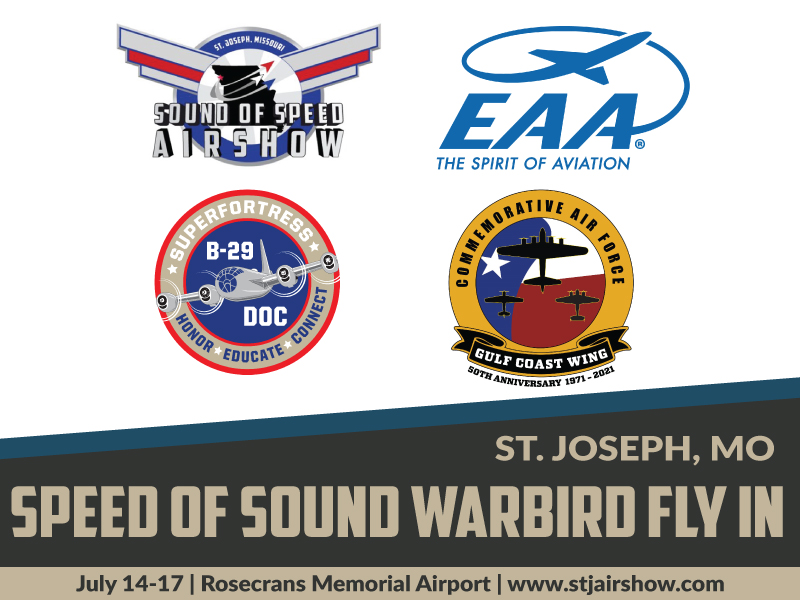 “The Sound of Speed Airshow is greatly looking forward to hosting these literal pieces of our nation’s history at our first ever Warbird Fly-In.  We want to give back to the community of St. Joseph for all the tremendous support we receive putting on airshows,” said Captain Julius Rice, Sound of Speed Airshow executive director.  “It is always nice to get one or two warbirds at a single event, but to get five at once is almost unheard of outside of huge venues. This is a truly unique experience for St Joseph and surrounding communities. It will be an educational event to not just read about; but to see, touch, and hear World War II aviation history in your own backyard.”

The four-day event will feature the following aircraft:

All five aircraft will be available for ride flights, as well as ground and cockpit tours.

“This event will be a unique and one-of-a-kind, giving warbird enthusiasts an up-close and personal experience to see three World War II era bombers that helped deliver victory to the Allies and preserve freedom,” said Josh Wells, B-29 Doc executive director. “We are proud to partner with our CAF and EAA friends to further our joint mission of honoring the legacy of the Greatest Generation, while inspiring future generations of aviators.”

The aircraft are scheduled to arrive in St. Joseph, MO, at Rosecrans Memorial Airport at approximately 11 a.m., Thursday, July 14. Gates will open to the public from 10 a.m. to 4 p.m. Friday, July 15, Saturday, July 16, and Sunday, July 17. Admission tickets can be purchased online ahead of the event for $10 per person or $25 per family. Admission at the gate the day of the event will be $15 per person and $30 per family. Tickets can be purchased in advance online at www.stjairshow.com.

“All five warbirds are notable for their historic significance and level of restoration, and the CAF B-17 Flying Fortress Texas Raiders is one of only three actively flying in the U.S. today. Restoring and flying vintage historic aircraft for more than half a century, the CAF mission is to educate, inspire and honor through flight, and we believe the best way to do that is to offer the opportunity for the public to literally put their hands on history and experience historic American military aviation up close,” said Nancy Kwiecien, executive officer of the Gulf Coast Wing of the Commemorative Air Force.

Ride tickets are available for all aircraft via these links:

“The B-25 coming to the event is one of EAA’s most recent restorations and it has been very well received at every tour stop we’ve made since we started taking the airplane to sites throughout the country,” said Sean Elliott, EAA’s vice president of advocacy and safety, who leads EAA’s air operations and often pilots the aircraft. “To join with these other historic aircraft at St. Joseph will create an unforgettable gathering for aviation and history fans as we tell the story of heroism and sacrifice.”

About Doc’s Friends and B-29 Doc
Doc’s Friends, Inc., is a 501c3 non-profit board managing the operation of the Boeing B-29 Superfortress known as Doc. Doc is a B-29 Superfortress and one of 1,644 manufactured in Wichita during World War II. It is one of only two remaining B-29s that are still airworthy and flying today.  The mission of Doc’s Friends is to HONOR the men and women who sacrificed so much for the freedom of others, including those who designed, built, maintained and flew the B-29 during and after WWII. CONNECT people with the rich heritage of the B-29 and allow aviation enthusiasts to experience the thrill of a B-29 up close. EDUCATE today’s and future generations on the contributions of the Greatest Generation during wartime.

About EAA
The Experimental Aircraft Association (EAA) is based in Oshkosh, Wisconsin, and embodies The Spirit of Aviation through the world’s most engaged community of aviation enthusiasts. EAA’s 240,000 members and 900 local chapters enjoy the fun and camaraderie of sharing their passion for flying, building and restoring recreational aircraft. For more information on EAA and its programs, call 800-JOIN-EAA (800-564-6322) or go to www.eaa.org. For continual news updates, connect with www.twitter.com/EAA.

About B-25 Berlin Express
EAA’s B-25 Mitchell bomber represents the hundreds of these medium bombs used by the Allies during World War II in campaigns around the world. Its restoration was completed in 2019 and it is now painted in the markings of the Berlin Express, the airplane it portrayed in the movie Catch-22. More information is available at FlyTheB25.org.

About Commemorative Air Force (CAF)
The CAF was founded to acquire, restore, and preserve in flying condition a complete collection of combat aircraft flown by all military services of the United States, as well as selected aircraft of other nations, for the education and enjoyment of present and future generations of Americans. More than just a collection of airworthy warplanes from the past, the CAF’s fleet of historic aircraft, known as the CAF Ghost Squadron, recreate, remind, and reinforce the lessons learned from the defining moments in American military aviation history.