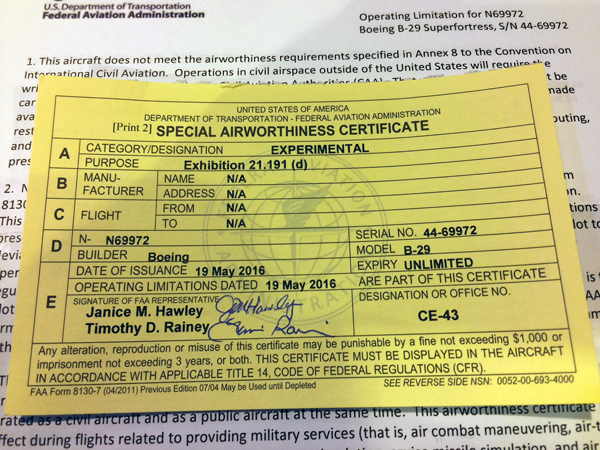 The Federal Aviation Administration has deemed the B-29 known as Doc airworthy by officially presenting the restoration crew with an FAA airworthiness certificate.

The official airworthiness certificate from the FAA. A small group of volunteers and supporters gathered Friday, May 20, 2016 for an acceptance ceremony.

*More photos and a video highlight of the event will be posted soon.

The airworthiness certificate is the most notable milestone yet for the team working to restore the historic B-29. It also comes three days before the 16th anniversary of Doc arriving in Wichita on May 23, 2000 to begin its restoration journey.

“It’s been nearly 60 years since Doc has flown and 16 years since this majestic warbird arrived in Wichita to be restored, and now we are another major milestone closer to a return to flight,” said Jim Murphy, Doc’s Friends Restoration Program Manager. “Today, we celebrate this major milestone and honor the hundreds of thousands of hours of volunteer work that has gone into restoring our B-29. From the team who saved Doc from rusting away in the Mojave Desert in California, to the dedicated volunteers who have been working tirelessly on the restoration project since Doc was brought to Wichita 16 years ago, today is great day.”

With the FAA airworthiness certificate in hand, the restoration team will soon submit an official request to the U.S. Air Force and Pentagon to be granted access to use the non-joint-use runway at McConnell Air Force Base in Wichita, Kan., for test flight operations. Upon approval, the restoration crew can use the runway for high-speed taxi tests and other ground testing needed prior to first flight.

“The dream of getting Doc back into the air to serve as a flying memorial and museum to honor the men and women who served our nation in these airplanes, and those who built and maintained the fleet, just took a major step toward reality,” said Jeff Turner, Doc’s Friends Chairman. “It’s because of Tony Mazzolini and hundreds of volunteers who have touched Doc along the way that we have reached this milestone. On behalf of the entire Doc’s Friends board, I thank you for all you have done.”

As for the scheduling of ground testing and eventually first flight, information will be provide online at www.b-29doc.com and via releases delivered to the media. Those who are interested are encouraged to sign up to receive instant updates from the restoration crew as they are released by visiting www.b-29doc.com/signup.