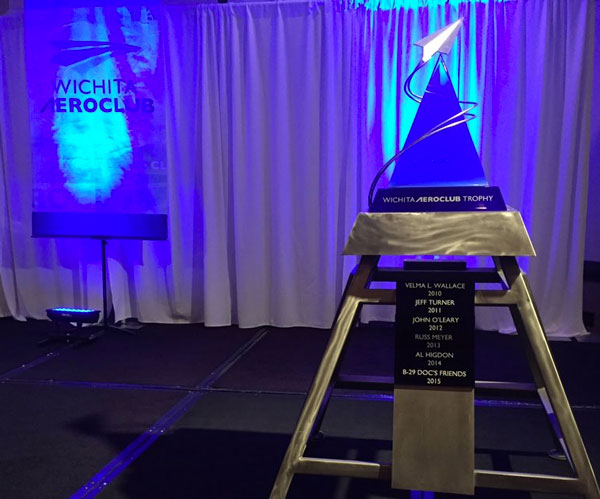 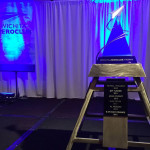 “This award recognizes our team of restoration volunteers, and it signifies and celebrates their great dedication to getting our historic B-29 back into the air,” said Tony Mazzolini, Doc’s Champion and the person who first identified the last restorable B-29 in 1987. “Receiving the Wichita Aero Club Trophy is testament to the long hours and tireless work these volunteers have put in since the plane was rescued from a bombing range in the Mojave Desert three decades ago.”

Fifty-eight of the Doc volunteers were in attendance and were recognized during the annual Wichita Aero Club Gala in January, where the trophy was presented. Mr. Mazzolini, Doc Restoration Program Manager Jim Murphy, and Connie Palacio, an authentic “Rosie the Riveter” who worked on the airplane when it was originally built in Wichita in the 1940′s spoke.

The video below was played during the Wichita Aero Club Trophy presentation ceremony. Video by: Sullivan Higdon & Sink, Wichita, KS.

“From the beginning, this team has been focused on one thing: getting this historic warbird back into the air,” said Jim Murphy, Restoration Program Manager for Doc’s Friends. “This plane means so much to so many people. Many of our volunteers either helped build our B-29 when it came off the assembly line at Boeing Wichita in 1945 or served our nation in a B-29 during conflict. Some have even carried out their volunteer work to honor a loved one who either served our nation in a B-29 or was member of Wichita aviation work force during the 1940s and 50s.”

Click here to read the complete news release from the Gala event from the Wichita Aero Club.