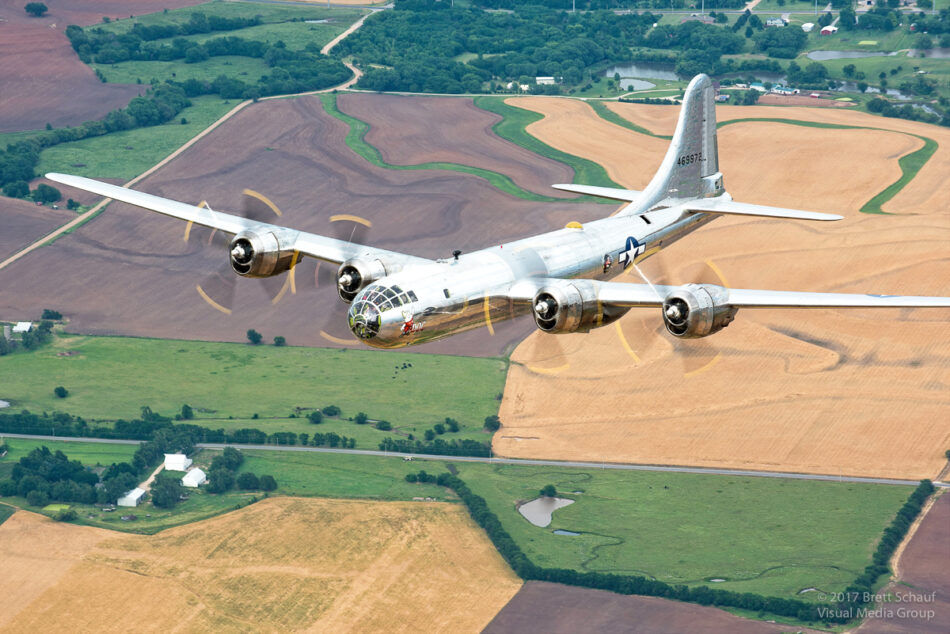 Due to demand for flights and departure schedules, the schedule for ground and cockpit tours has been updated.

The B-29 Doc History Restored Tour will land at Cleveland’s Burke Lakefront Airport, July 19 for a three-day tour stop.

B-29 Doc, one of only two B-29 Superfortresses still airworthy and flying today, is scheduled to arrive at the main terminal building at Burke Lakefront Airport at approximately 2 p.m., Monday, July 19. The Cleveland stop is the fourth stop for the B-29 Doc History Restored Tour in July that includes visits to a total of seven cities across five states.

Upon arrival, B-29 Doc will be greeted by Cleveland’s own Tony Mazzolini, who found and rescued B-29 Doc from the Mojave Desert nearly three decades ago. Tony, along with World War II veteran Owen Hughes, who painted Doc’s current nose art, will join the American Legion Riders for the welcoming ceremony at Burke Lakefront. 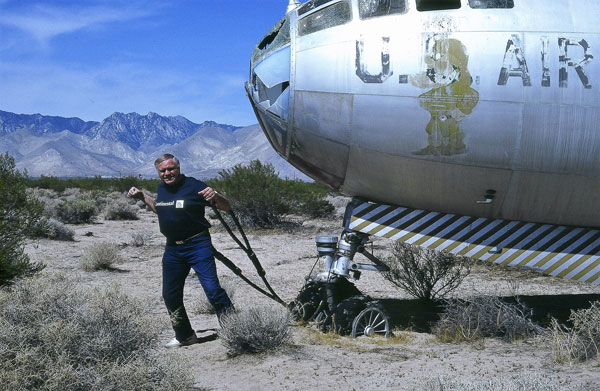 Tony Mazzolini in 1998 with B-29 Doc at China Lake Naval Air Weapons Station.

“When I first saw this B-29 serving as a missile target on the bombing range of China Lake Naval Air Weapons Station in the 1980s, I never imagined I would be able to share its glory with my hometown,” Tony Mazzolini said. “It’s an honor to welcome this majestic warbird to Cleveland and give people an up-close and personal look at the aircraft that has meant so much to me, as well as many others, throughout its life.”

Tony, who served as a flight engineer on multi-engine aircraft during the Korean War, will be reunited with his friend and colleague Owen Hughes, now 102-years-old. Both Tony and Owen will spend the weekend with Doc while the historic aircraft is in Cleveland.

“Bringing Doc back to Cleveland to honor Tony’s work of rescuing this warbird from being destroyed as a missile target by the Navy and his vision to restore it to flight is a tremendous honor for our crew,” said Josh Wells, general manager and executive director for B-29 Doc. “And being able to celebrate Owen’s World War II service to our nation is what our mission is truly all about. Today, Doc serves as a flying tribute and museum to the Greatest Generation, along with those who designed, built and flew these airplanes to protect freedom, and  to those who continue to defend our nation at home and abroad.”

BOOK YOUR SEAT ON B-29 DOC IN CLEVELAND!

Those interested in attending the ground and cockpit tour event, as well as aircraft rides, should arrive at the Burke Lakefront Airport Terminal building, 1501 N. Marginal Road, Cleveland, OH 44114.

The B-29 Doc History Restored tour in the month of July launched in Wichita, KS, on July 2. Over the course of the month of July, B-29 Doc will visit St. Louis, MO; Terre Haute, IN; Cincinnati and Cleveland, OH; Kalamazoo, MI; and Oshkosh and Appleton, WI, before returning to the B-29 Doc Hangar, Education and Visitors Center in Wichita August 2.