B-29 Doc History Restored Tour to Land in Cincinnati, OH 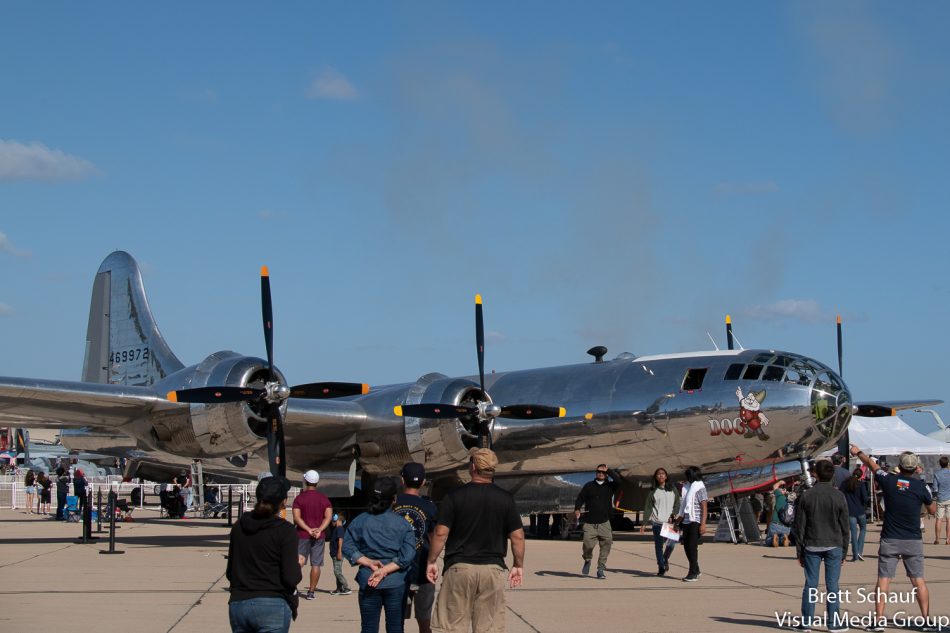 The B-29 Doc History Restored Tour will land in Cincinnati, OH, for ground tours and B-29 Doc Flight Experience rides May 1-3, 2020.

Doc will arrive at Lunken Airport Thursday, April 30, and will be available for warbird rides and ground and flight deck tours during the three-day event, Friday through Sunday. The tour stop in Cincinnati will be hosted by Cincinnati Warbirds EAA Squadron 18, which will also have vintage warbird aircraft on display and available for ride flights. Military vehicles, history exhibits and meet-and-greet opportunities with WWII veterans will also be available.

“This will be our first major event of 2020 as we commemorate the 75th Anniversary of the end of WWII in which the B-29 played a major role,” said Jim Stitt, Cincinnati Warbirds president and commander.

The tour stop for B-29 Doc in Cincinnati, OH will be the first stop on a nearly six-week tour that includes Doc’s participation in the 2020 Arsenal of Democracy Flyover in Washington, D.C., that was announced earlier this week. Additional stops for the B-29 Doc History Restored Tour in May and early June will be announced soon.

“We are excited to partner with the Cincinnati Warbirds EAA Squadron 18 to bring B-29 Doc to Cincinnati on our way to Washington, D.C., to give warbird fans in the tri-state area a chance to see one of only two B-29 Superfortresses still flying today,” said Josh Wells, Doc’s Friends executive director and general manager. “This will event will not only feature B-29 Doc, but other vintage warbirds, including the B-25 Axis Nightmare operated by the Tri-State Warbird Museum, and a host of others from the Cincinnati Warbirds team as we promote our mission of offering up-close and one-of-a-kind experiences that will honor the Greatest Generation, while educating future generations about our nation’s history.”

Event Details for B-29 Doc in Cincinnati

Gates will open Friday, May 1 for static ground and flight deck tours from 9 a.m. to 4 p.m. WWII veteran TSgt. Howard Watrous, who served as a B-29 flight engineer stationed on Tinian Island will be available for meet-and-greet during the weekend. Ground and flight deck tours will also be available Saturday, May 2 and Sunday, May 3 from 12 p.m. to 4:30 p.m., following morning ride flights. Admission for the static display event and flight deck tours will be $10 per person and $20 per family. The flight schedule for the B-29 Doc Flight Experience is 9 a.m. and 11 a.m., Saturday, May 2 and Sunday, May 3. For details about the B-29 Doc Flight Experience and to purchase ride tickets, visit www.b29doc.com/rides.

The public can enter the event at the Lunken Airport Terminal Building (262 Wilmer Avenue, Cincinnati, OH, 45226). Parking is free and restroom facilities will be available in the terminal building.

Additional tour stops for B-29 Doc in May and June will be announced soon.

“We are still finalizing the remainder of our 2020 tour season, which will include return trips to EAA AirVenture in July, as well as a return trip to California in September and October,” Wells said. “In all, Doc’s 2020 tour season is expected to include stops in more than a dozen states from late April through late October of this year.”

About Doc’s Friends
Doc’s Friends, Inc., is a 501c3 non-profit board managing the operation of the Boeing B-29 Superfortress known as Doc. The mission of Doc’s Friends is to HONOR the men and women who sacrificed so much for the freedom of others, including those who designed, built, maintained and flew the B-29 during and after WWII. CONNECT people with the rich heritage of the B-29 and allow aviation enthusiasts to experience the thrill of a B-29 up close. EDUCATE today’s and future generations on the contributions of the Greatest Generation during wartime.

About Cincinnati Warbirds EAA Squadron 18
The Cincinnati Warbirds EAA Squadron 18 is a 501C3 non-profit educational organization founded in 1996 whose mission is to: PRESERVE historic military aircraft; HONOR our veterans and current military for their service and sacrifice; EDUCATE the public about the role they played in defending our freedom and building our country; INSPIRE future generations to continue the legacy. We organize and sponsor numerous events including displays of historic warbirds, trips to airshows and museums, educational seminars and scholarships, warbird restoration projects, and other functions of interest to members. For more information or to join visit www.cincinnatiwarbirds.org.