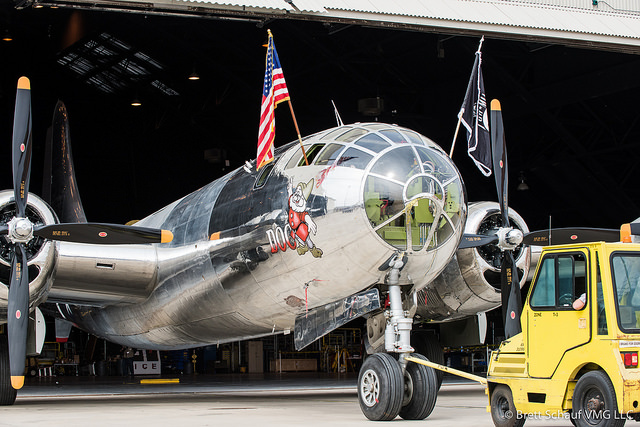 Following a 30-day Kickstarter campaign, “Doc,” the historic warbird that will soon become the second operational B-29 Superfortress, has achieved the additional funding needed to support its flight-test phase. OnOct. 30, Doc’s Friends concluded the campaign with 1,007 backers, who pledged a total of $159,151.

The Kickstarter effort was the first attempt at crowdfunding by Doc’s Friends, the nonprofit organization restoring the B-29. “This was a leap of faith for us. We knew Doc had a lot of friends, but now we know Doc has family around the world,” said Tom Bertels, Doc’s Friends board member.

The group had 30 days to reach their goal of $137,500. With one week to spare, the goal was met after a sudden surge in pledges. More than $65,000 was pledged in two days following the announcement of an anonymous donor willing to match donations, up to$10,000.

In the end, the goal and more, was received, both through and outside of Kickstarter. Doc’s Friends reported a high number of direct donations. Additional funds will cover the costly flight-test program and go toward the operations of this aircraft.

“It’s truly humbling. The outpouring of interest and goodwill from so many people inspires us to get Doc back in the air, and that’s exactly what we’re going to do,” said Jeff Turner, retired Spirit Aerosystems CEO and Doc’s Friends chairman.

With this funding, Doc is one step closer to its first flight in more than 60 years. Follow Doc’s Friends’ progress to first flight on theirwebsite, Facebook and Twitter.

About Doc’s Friends
Doc’s Friends is a 501(c)(3) nonprofit board managing the restoration of the Boeing B-29 Superfortress known as Doc. The group was formed in 2013 and is led by retired Spirit AeroSystems CEO, Jeff Turner. Doc’s Friends is committed to returning this warbird to the air to honor previous generations, educate current and future generations, and connect the world to the rich heritage of aviation. You can find more information about Doc’s Friends at www.b-29doc.com.