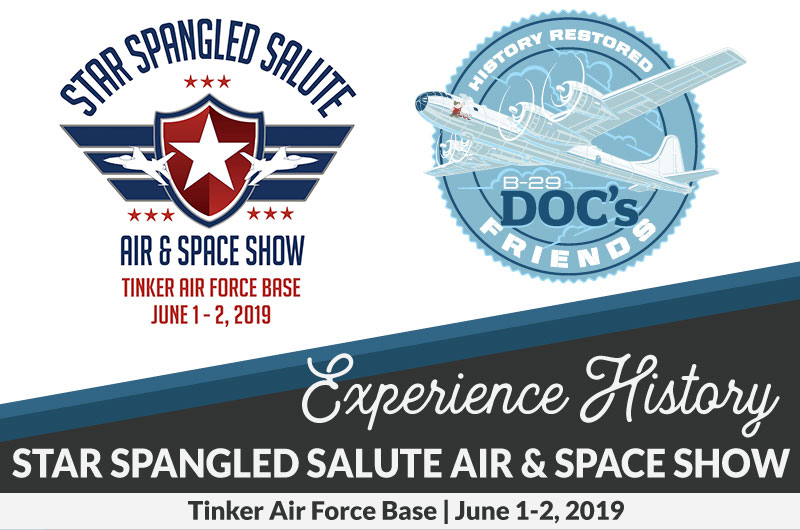 This airshow will be the second stop in Oklahoma for B-29 Doc in 2019. Doc will be on static display for cockpit tours during the two-day event.

“One of the significant highlights to this year’s Star Spangled Salute, Air and Space show at Tinker Air Force Base is the B-29 Superfortress known as Doc,” said Lieutenant Colonel Casey “KC” Hayes, Air & Space Show director. “Having Doc participating in this year’s air and space show will be a huge draw for Oklahoma City community spectators, in line with our show theme of “Saluting Armed Forces—Past, Present and Future. The B-29 Superfortress is deeply rooted in our nation’s airpower history by being the largest and most advanced operational aircraft during World War II and the Korean War era. Doc, one of only two flying B-29s, is an incredible story of how volunteers spent two decades rescuing it from the Mojave Desert and then restoring the warbird to flying condition.”

The weekend prior to the Tinker Air Force Base stop, Doc will be in Tulsa at the Tulsa Air and Space Museum and Planetarium, May 25 and 26. The event at TASM will include cockpit tours and B-29 Doc Flight Experience rides. Details can be found online at www.b29doc.com.

So far in 2019, Doc has logged more than 15 hours of flight time, which includes several training flights for the Doc’s Friends crew, and multiple B-29 Doc Flight Experiences in Wichita.

“Our volunteer maintenance team continues to do an amazing job of keeping Doc in top flying condition,” said Ken Newell, B-29 Doc chief of maintenance, flight engineer and pilot. “I’m tremendously proud of what our team does on a daily basis to allow us to share our B-29 and its history with air show attendees across the country. Each time we prepare to fly Doc it’s something special and I’m humbled to be part of the crew.”

Additional tour stops for Doc in July, September and October are still being finalized and will be announced soon. More information about the current tour scheduled for 2019 can be found online at www.b29doc.com/events.